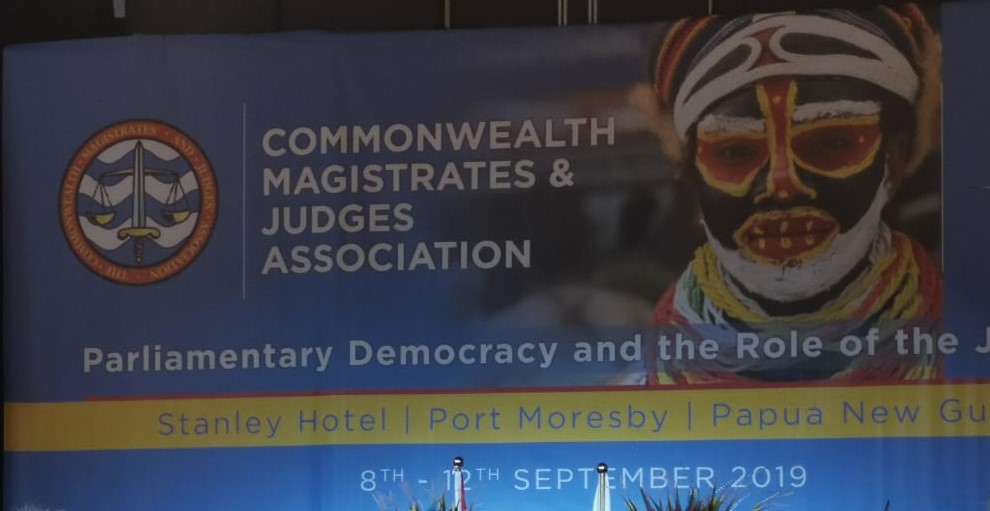 The Commonwealth for Magistrates and Judges Association (CMJA), 2019 Annual Conference was held in Port Moresby, Papua New Guinea from the 8th to 12th of September. The theme of the conference was “Parliamentary Democracy and The Role of the Judiciary.” The CMJA was founded in 1970, it plays a vital role in developing judicial standards and strengthening judicial independence and enhancing the rule of law.

The CMJA conference aimed to promote better understanding, create awareness and to enhance networking amongst all the magistrates and judges of the Commonwealth. It provided a platform for magistrates and judges to come together in unison to develop a better understanding of the judicial systems. The conference also created an opportunity for the delegates to network and deliberate on judicial developments and challenges.

The Conference was welcomed by the Deputy Chief Justice of Papua New Guinea, Sir Gibuma Gibbs Salika. Throughout, guest speakers were invited to talk about the different judicial practices with the objective of promoting awareness about the CMJA to the judicial officer, as well as, broadening their understanding of international treaties and law.

The CMJA Conference covered a wide variety of topics, some of the discussions were on the ways judges should conduct themselves while in office. The first session was on the judicial career from appointment to post-retirement, the speaker took the delegates through six stages judges go through before appointment, during the appointment period, and retirement. The focus of this discussion was to ensure the delegates know what to expect as a judge.

Sir Peter Thornton also gave a speech on judicial career, however, he discussed judicial leadership. He outlined the methods in which judges could advance their courts by having strategic plans to improve their leadership skills.

The speakers also touched on ways justice could be dispensed through Grassroot and Religious Courts. Grassroot courts are used as an alternative to Judicial Courts, the speakers stated that the judges of these courts are usually the Chief Justice or elderly of communities. Whereas for Religious Courts, the speaker mentioned the Kadhi Courts, these courts focus on the Shari’a Law. The CMJA Conference was successful in enhancing the magistrates and judges with the knowledge to enable them to improve the jurisdiction at their respective coun