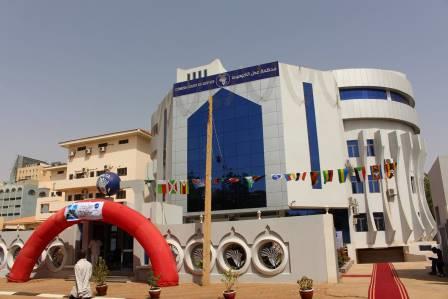 The Government of Sudan has officially handed-over the newly built and furnished state of the art COMESA Court of Justice in Khartoum.

The Court was built and furnished by the government of Sudan at a total cost of USD 4.2 million out of which USD 3.5 million went into construction of the building while USD 695, 000 was spent in furnishings and communication equipment.

The premises consists of two Court Chambers; one for the Appellate and the other for the First Instance Court. Both are fitted with information technology and interpretation equipment to cater for up to 12 languages. There are four chambers for the five appellate judges and six chambers for the seven judges of the Court of First Instance. All have their own consultation rooms and offices for Secretaries.

Other facilities include fully furnished offices of the Registrar, administrative staff and library. Two fully equipped kitchens with canteens are provided. Every Chamber and office is fitted with wall mounted Plasma TV screens including public spaces such as the reception, dining areas and boardrooms. There are two consultation rooms for counsel, four robbing rooms and a CCTV system among other fittings.

In his address, the Minister for Justice said the construction of the Court was done to meet the highest international standards. He said the handing over of the Court facilities was in fulfillment of the promise made by President Omar El-Bashir of Sudan at the Seventeenth COMESA Heads of State and Government Summit in Kinshasa in February this year. This he noted will enable COMESA to achieve its goal of enforcing good governance in its regional integration efforts.

“Economic cooperation can only succeed in an environment of good governance and the rule of law and in this regard my Ministry will provide full support to the court in discharging its mandate”, the Minister said.

He re-affirmed the Government of Sudan’s commitment to fulfilling its obligations under the Host Agreement of the Court and to work with the Court in publicizing its mandate, role and ways to access it by all stakeholders in the country.

The Justice Minister promised that the government of Sudan will fulfill all obligations under the Agreement signed with COMESA to ensure the Court is facilitated to run smoothly in its new headquarters. This includes the provision of stipulated privileges for and accreditation of the Court judges and staff.

Receiving the Court keys on behalf of COMESA, Amb Nagla thanked the government of Sudan for the generous gesture which she said had raised the bar in the standard of COMESA institutions and organs based in Member States.

“It has been a long and not easy journey but the labour of the government which has invested a lot of money in such a magnificent building has not been in vain,” she said. “This historic occasion marks the realization of a permanent seat for the Court of Justice which will enable it contribute more effectively to the regional integration agenda through provision of dispute resolution mechanism which in turn will instill more confidence to investors in the region”.

The handover paves way for the beginning of the relocation of the Court from its current temporary residence in Lusaka to its official permanent seat in Sudan.

The ceremony was also addressed by the Sudan Minister for Trade Hon. Osman Alsharief and the Chief Justice Dr. Haidar Ahmed Dafa’alla. In his remarks, Hon. Alsharief pledged support to the Court, as the Coordinating Minister for COMESA programmes in Sudan and to ensure that his country effectively participates and benefit from all COMESA Programmes.

“Conflicts are inevitable in any functioning trade regime and it is therefore imperative that the COMESA Trade regime should have a strong and independent dispute resolution mechanism”, the Minister said.

The Chief Justice pledged support to the Court in its role of promoting the rule of law and good governance under the COMESA Integration Agenda. Ends